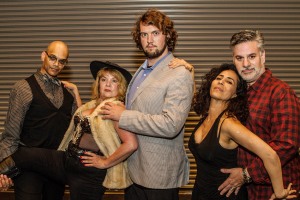 The Redwood Symphony is opening its 2016-2017 season by going into new musical territory (for this orchestra anyway). Saturday night’s season opener will be a partially staged, fully orchestrated performance of Kurt Weill and Bertolt Brecht’s satirical, political operatic assault – Rise and Fall of the City of Mahagonny. Mahagonny was first presented in its entirety in 1930, though a smaller concert work featuring a subset of the songs debuted a few years before. The full work, which will be sung in English, lampoons both opera and politics, the latter being particularly relevant today. Maestro Kujawsky had the privilege of playing in the orchestra for a production of this opera while in graduate school and has looked forward to someday conducting it himself. He carefully selected this program slot as the perfect time to realize his dream.

Kujawsky’s orchestra and director Phil Lowery’s cast have been in rehearsal for the past several weeks, polishing and putting the final touches on a spectacle that should not be missed. The haunting score features musical styles ranging from ragtime, to jazz, to formal counterpoint, finely tuned to exude emotion and leave the audience in awe. This is a challenging work that brings out the best in the musicians.

There are a handful of extra instrumentalists as well covering instruments that are not normally included in standard symphonic works.

The full opera has a somewhat rocky past given the Nazis banned it a few years after its premiere (which speaks well of its integrity). Any production that appeared once the material had been banned was stormed by troops and shutdown. It wasn’t until the 1960s that the opera made a comeback in Europe, though it didn’t reach the United States until 1970. While never reaching the popularity of Weill and Brecht’s The Threepenny Opera, Mahagonny has enjoyed a very positive critical reception worldwide.

The opera has some mature content given its themes of corruption and vice, so the event is not appropriate for very young children. And note that the downbeat is at 7:30 p.m. with Maestro Kujawsky’s pre-performance lecture at 6:30 p.m. For some additional background, take a look at the program notes and don’t miss this extraordinary performance. There won’t be a review of this performance on A Good Reed Review because yours truly will be participating in the presentation from the back row of the orchestra.

What: Redwood Symphony – Special Event – Kurt Weill and Bertolt Brecht’s Rise and Fall of the City of Mahagonny

Additional reference:
Weill: Rise & Fall of the City of Mahagonny

Photo courtesy of the Redwood Symphony.