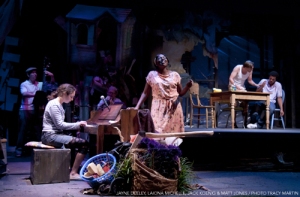 TheatreWorks is presenting another world premiere with “Clementine in the Lower 9”, a new play by Dan Dietz dealing with the fallout and personal tragedy of a New Orleans family following hurricane Katrina. Dietz patterned his play using the Greek tragedy form, specifically on Aeschylus’ “Agamemnon” and infused it with blues music created by composer Justin Ellington. Though not a musical, the music is central to the mood, imagery, and tone of the play.

As in a typical Greek tragedy, the Chorus is an integral part of the story providing continuity and commentary on the principal action. In Dietz’ current work, the Chorus sets the scene at the top of the show in poetic fashion, equating the happenings in New Orleans in the wake of Katrina, 9 months hence, to dealing with the fury of the gods. The Chorus bridges the action from the family to the live on-stage jazz combo – piano (Kenny Brawner), bass (Richard Duke), drums (Kelly Fasman), and trumpet (John Worley). In this production, Brawner is also the Chorus providing the vocals and connective narration.

The family members are trying to reclaim their lives and rebuild their home following the disaster. Clementine (Laiona Michelle) – a former jazz pianist and nurse – acts as head of the house while her husband Jaffy (Jack Koenig) is off in Houston trying to earn some money as a jazz trumpet player. Their son, Reginald (Matt Jones), is home for the summer from Columbia University, and is amazed at the level of destruction having been away at his first year of college when the storm hit. Jaffy returns from Texas with “Cassy” (Jayne Deely), a teenage junkie, who he claims can see the future and helped him gain some funds. The family is in mourning over the loss of their daughter, who was swept away by the flood during Katrina, although there’s more to that part of the story than we are at first led to believe.

Each member of the family has a secret that eventually comes to bear, testing the bonds of family solidarity and pushing the boundaries of forgiveness. Along the way, well written discourse steeped in dark humor ensues, intermixed with interludes of well-timed, original blues music.

J.B. Wilson has created an inspiring set, the house and yard in complete disarray, looking as they might if they’d come through rushing river that was Katrina in the Lower Ninth Ward in New Orleans. The opening scene has the roof covered with candles, set as a beacon for Jaffy to spot upon his return. After the initial scene with Clementine and Reginald, we are left with the house across the stage, partial walls and studs, with several working doors demarcating the regions of the house. In the front yard, a car is standing on its nose against a pile of debris stage left. Sitting stage right is a piano, and a large crate as the piano bench. The remainder of the jazz combo sits upstage right of the piano.

The lighting and sound provide nice accents to the performances, from the storm sounds at the top of the show, to varying light for daylight vs. night, which all contrast with the narrated Chorus sequences.

Leah C. Gardiner’s direction achieves an impressive ease. The dramatic start after the initial narration begins with Clementine and Reginald on the roof, lighting more candles. Their banter is believable as mother and son, and is both touching and very humorous at times. Jones’ early line describing his mother “…Registered nurse, piano prodigy… and now full-blown arsonist. Those hands of yours got skills, Mama…” is indicative of the type of exchanges involved.

After the initial scene, the roof flies out during a blues interlude, and we enter the house as mother and son prepare for Jaffy’s return. Koenig’s Jaffy is a stark contrast to Michelle’s Clementine. Clementine is down to earth, matter of fact, and mostly all business, at least at first; whereas, Koenig’s character is believably thick in the jazz musician’s world, a recovered addict, and kind of smarmy. The first impression is that he’s trying to sell them something, but he’s a believable and sympathetic character all the same. Eventually, he pulls out his trumpet and plays a couple of times during the show, simple passages, but with a sweet tone that reads well from the house. Given the actor hadn’t played since childhood, and then not on trumpet, Koenig does fairly well.

Cassy is disconcerting initially, but as she evolves, she becomes a more sympathetic character. Deely handles this transition well, playing an annoying, distracted, aloof, and frightened teenager at first, then injecting a nicely played pair of scenes with Jones and with Michelle as their characters each expand their comfort zones with this “outsider” that dad drug home. Deely and Koenig’s Chemistry matches the implied “father-daughter” relationship Jaffy claims they had while in Texas.

The real triumph in staging comes in Act 2 when we have two disparate conversations superimposed: one between Koenig and Jones upstage right; the other between Michelle and Brawner downstage left. All the while Deely plays a simple exercise pattern on the piano and the rest of the combo improvises quietly under the dialogue. This is a riveting scene with great intensity as we learn some deep secrets that have haunted the family members for some time. It would give far too much away to divulge the content of these conversations other than to say that the entire cast reads true to life with great empathy and depth throughout the scene.

As the story develops, we find out why Clementine has eschewed both her music and her career in nursing, but along the way, Michelle has a moment late in Act 2 when she retakes the piano, and plays a lovely solo. Her solo is all the more impressive because she learned to play piano specifically for this role, and in fairly short order at that. Michelle’s changes in demeanor as circumstances reveal themselves are impressive and completely believable.

The final two scenes are a bit shocking, but given what transpires prior, they bring the play to a reasonable and satisfying conclusion.

TheatreWorks’ production of “Clementine in the Lower 9” is an unusual and enjoyable evening’s entertainment and continues through Sunday, 30 October at the Mountain View Center for the Performing Arts. Please note that due to some adult language and brief nudity, the play is not appropriate for young children. See http://www.theatreworks.org/shows/1112-season/clementineinthelower9 for more information.