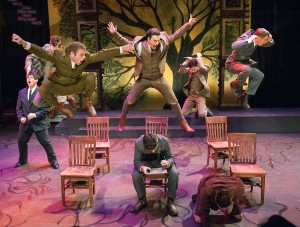 Foothill Music Theatre has taken on a German impressionist masterpiece presenting Spring Awakening, a musical based on Frank Wedekind’s 1891 play, Frühlings Erwachen.  The musical keeps much of the intensity of the play, although it softens a few scenes and deletes others, but the message is clear as noted in the title of this review.  Ignorance is not bliss, and parents don’t do their children any favors by keeping them in the dark about human nature and sexuality.

With book and lyrics by Steven Sater and music by Duncan Sheik, Spring Awakening keeps much of the flavor of the original play, the story set in repressive 19th century Germany where modesty and decorum were paramount.  Unfortunately for the young Wendla Bergmann (Juliana Lustenader), this means her questions to her mother about puberty go unanswered, and she must figure things out on her own.  For Moritz Stiefel (Ryan Mardesich), puberty is also baffling, and he finds himself unable to focus on anything except for some embarrassing dreams.  His best friend Melchior Gabor (Jason Rehklau) seems to have it more together, at first anyway.  Per Moritz’s request, Melchior writes a lengthy essay explaining the intricacies of what they are going through, diagrams and all.  The inevitable collision of teenage angst, authoritarian adults, and innocent, yet dangerous experimentation amongst the children yields some powerful results.

There’s far more to it than this starting point of course, and director Milissa Carey has assembled a very strong and energetic cast.  She joins with choreographer Amanda Folena from Broadway by the Bay to stage an explosive production, releasing the tumult of emotions one might expect from the hormones raging inside the adolescent children the cast members portray.  Musical director Mark Hanson completes the artistic staff trio bringing the full orchestration to life with his seven piece orchestra combining a driving rock band rhythm section with the warmth of a single-threaded string section.

The adult characters are played by the duo of Justin Karr and Caitlin Lawrence Papp.  Both play multiple roles from various parents to teachers, all with an intensity befitting the authoritarian climate of the time.  Karr in particular shows his versatility and training in some very stern and physical scenes as the headmaster with his student charges, while he appears more vulnerable as Herr Stiefel when he discovers the tragedy that consumes his son.

The set is minimal and mostly abstract, chairs being brought on and off by the actors as they need them.  There are two moveable staircases that normally sit toward the sides of the stage, but they are brought forward at one point to very effectively form a raised platform representing a hayloft.  A painted tree forms the background, and when the scene moves to the forest, a pair of actors bring in matching tree limbs upstage to frame and complete that picture.

While it won’t do to relate every musical number as that would disclose far too much of the plot, a few highlights are well worth mentioning.  Lustenader’s first song, “Mama Who Bore Me”, is lovely.  Her sweet voice is clear, and she embodies the right emotion of the confused adolescent she’s playing.  She has a heartfelt scene with Papp as the evasive mother “who bore her” following the opening number and the two nicely capture the dynamic between their characters.  Lustenader then leads her remaining classmates in a reprise of “Mama Who Bore Me”.  This is a very nice number.  The movement is tight, clean, and evocative.  The women’s ensemble also blends very well vocally.

When we then meet the testosterone charged portion of the cast, after reciting their Latin lessons, they eventually burst into “The Bitch of Living”, an energetic, angst-ridden number that sets the tone for their struggle with adolescence.  The number is heavy, hot, and the movement is frenetic, yet nicely synchronized and ends with glowing precision.  The actors also get some air as is evident in the production photo above.  There are a few moments when some of the solos are partially covered by the orchestra, but the men’s ensemble sound is quite good.

The opening to Act 2 starts with “The Guilty Ones” sung by Lustenader and Rehklau under the preacher’s sermon, and they are eventually joined by the rest of the students.  This too brings with it a tuneful message in a nice montage of motion and emotion.  While a solid number overall, this is the one place where a small instrumental intonation glitch is sometimes noticeable.

“Don’t Do Sadness/Blue Wind” is a wonderful duet with Moritz and Ilse (Casey Ellis).  Each has previously sung their solo version of these songs, and this reprise provides a nice contrapuntal complexity, adding to the intensity of the messages.

“Left Behind” is the number where Rehklau finds his voice.  In his previous solos, he’s a little weak, easily covered by the accompaniment, but in this ballad, his voice is strong, heartfelt, and melancholy, and when he’s joined by the students, it’s the most potent number in the show.

When I initially listened to portions of the Spring Awakening cast recording without knowing anything about the show, my first impression was that it was merely Christian Rock with liberally sprinkled bouts of profanity.  After listening to it several more times, and now after seeing the show, I have a much greater appreciation for the depth of both the storyline and the score.  There are still a few segments where my first impression holds, but the lyrics are compelling, and there are several fusion numbers that have a driving rock beat under a more melodic and harmonically complex line such as was mentioned with respect to “The Guilty Ones” at the top of Act 2.

There are a few places where sound balance is sometimes a problem and the orchestra overpowers the singers, but this review is from the first performance the second weekend, a performance that always has the potential for some technical and timing challenges not seen elsewhere during the run.  As such, the strength of this cast and orchestra is all the more impressive.

Spring Awakening is a powerful piece of theatre that is worth seeing.  Its strong message that ignorance isn’t bliss plays out very directly and poignantly, reminding us that growing up is hard, no matter one’s gender, sexual preference, economic status, or historical era.  Because the show makes liberal use of profane language and has a number of sexual scenes (without accompanying nudity), the material isn’t appropriate for young children.