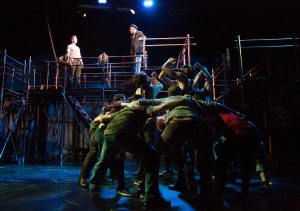 Some works are timeless, tackling issues that are relevant throughout the human condition. Stanford Repertory Theater’s current offering fits that bill. In a production that captures the essence of theater and humanity, the company brings the captain and crew of the Pequod to life in an enthralling presentation of Orson Welles’ Moby Dick, Rehearsed. The play sparks the audience’s imagination and stretches the actors physically, musically, and intellectually when spectators and performers alike are drawn together as this classic story unfolds.

Moby Dick, Rehearsed is an ambitious play. It takes a company of actors ostensibly rehearsing a production of King Lear and launches them into a young actor’s project of turning Melville’s tome into a play. They theoretically have no set, no props, and no costumes, grabbing whatever is at hand to help them get into character as they bring the monumental literary work to life.

Director Rush Rehm takes a few liberties with the opening scene in Welles’ script. He modernizes the prolog, i.e., the initial rehearsal scene before the actors switch into telling the familiar tale of Moby Dick. The original script is set in the late 1800s and follows theatrical standards of that time. Rehm’s modernization takes it from the mundane to a modern satirical extreme that might go just a bit too far. He incorporates iPhones into the “director’s” visions of theater, communication, and nonsensical language as they apply to an unorthodox rehearsal of an incomprehensible production of Lear.

The transition from Lear to Moby Dick is seamless and familiar to anyone who has spent time participating in theater. Initiated as a cast exercise, they start to recite the famous opening lines to Moby Dick from the young actor’s script in unison. They then progress to each actor taking one word from those lines in rapid succession in a company circle. The exercise eventually evolves into not only telling the story, but staging as they go, they become Melville’s cast of characters. Unlike the opening scene, once the story fully shifts into Melville’s tale, this production retains the original character of Welles’ script.

The play is truly an ensemble piece. Every member of the company is critical to the storytelling. There are a few more prominent roles such as the Lear Director/Father Mapple (Courtney Walsh), the “Playwright”/Ishmael (Louis McWilliams), the “Stage Manager” (Kaya McRuer), Starbuck (Peter Ruocco), and of course King Lear/Captain Ahab (Rod Gnapp), but every member of the troupe is featured at some point.

Walsh is also the movement/dance director, and there is some impressive choreography. The dances and fights are not the only things choreographed in this one. This cast captures the seafaring movements beautifully such that the audience members can feel the sea’s swells as they watch the action.

Rehm and Walsh together staged the action to give the illusion of the activities to keep a 19th century whaling ship’s machinery operating smoothly. This coupled with freezes and Michael Ramsaur’s impressive lighting design nicely emphasizes several particularly dramatic moments. Walsh studied historical depictions of the old whaling ships to fully understand and capture the correct motions of not only the ship’s operation, but of the harpoon handling. The result is a well-tuned symphony of movement timed perfectly with the storytelling. Every motion is significant and elegant down to the actors taking turns as the Mastheaders at the bow leading the ship’s journey across the ocean.

Annie Dauber’s scenic design is picture perfect. At the start, there are some white flat walls present that are removed from the scaffolding that becomes the ship. Its multiple levels, ropes, and platforms provide an intricate web that allows the actors to inhabit a ship without the specific framework.

Michael Keck’s sound design is also very smooth. Some of the sounds are quite subtle, or almost subliminal, while others are in the forefront. Sometimes the storms can be frightening, and the whale songs soothing, but they all greatly enhance the experience.

While this really isn’t “Moby Dick, the Musical”, an element that is a bit unexpected (though greatly appreciated) is the musical aspect. Music director Weston Gaylord incorporates some impressive full company vocal numbers including the hymn “Eternal Father, Strong to Save” and several sea chanties emphasizing rich harmonies made all the more impressive given they are largely performed a cappella. In addition, there are some lively dances accompanied by dual on-stage violinists and Gaylord on an antique concertina.

The ending is rather stark, but very moving. The play is all the more impressive in that this monumental story is told in a mere 90 minutes without intermission. This is a big story very nicely told in a small space such that you’ll swear you’ve seen that whale blow.

What: Moby Dick, Rehearsed by Orson Welles based on the novel by Herman Melville