Skip to content
HomeA look inside The Pear’s new digs 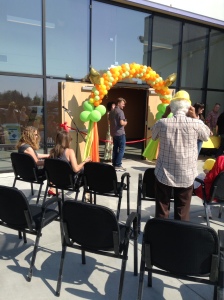 To paraphrase Mayor John McAllister, these are exciting times in Mountain View. Mayor McAllister bubbled with pride praising The Pear for its achievements and bright future at the 15 August ribbon cutting ceremony. He was clearly as thrilled as The Pear’s staff and supporters in attendance that the (not-quite-so-tiny) theatre is staying in Mountain View, only moving a few blocks from its previous home. Its new address is 1110 La Avenida St.

Supporters and press snuck into the lobby to get out of the intense heat outside a bit prior to the formal ribbon cutting. Some of the curious peeked around the corners from the lobby at the hallway to the restrooms and into the performance space. While the old facility on Pear Avenue sported a 40-seat black box performance space, no set shop, no rehearsal studio, and only one restroom for everyone, the new space is palatial by comparison. After the kind words from the mayor, several members of The Pear’s board excitedly showed those in attendance all the new features of The Pear Theatre. 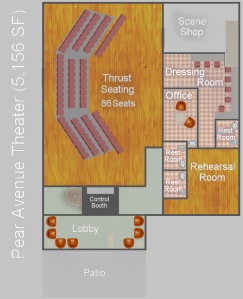 The new facility, designed by San Jose architect John Duquette, now has a reconfigurable performance space that ranges from 80-99 seats, at least doubling their audience capacity. The diagram to the left (by David LaCombe and Joseph D’Imperio) shows the thrust seating arrangement, but there are several configurations that can be used depending on the needs of the show. As can be seen in the diagram, there are also several new rooms including a scene shop, an office, two public rest rooms, a large dressing room with a separate rest room for the actors, and a rehearsal studio. Also, the inclusion of the lobby means that patrons won’t have to wait in the parking lot for the house to open.

Within the performance space, there’s now an inconspicuous lighting grid covering the entire ceiling of the black box, so lighting designers will have a great deal more flexibility. There’s also a rollup door the full height of the space to allow loading of particularly tall sets. The pieces can be built in the scene shop, and then the sets can be assembled either directly in the performance space, or outside, and rolled into the space.

And The Pear is still The Pear, which is good news for their website. They’ve slightly changed the full name from The Pear Avenue Theatre to The Pear Theatre, not forgetting where they started, but acknowledging they no longer live directly on Pear Avenue.

Pear fans don’t have to wait much longer to see the new space in action with the world premiere of The Walls of Jericho, by Pear Artistic Director Diane Tasca, opening on 18 September. The play is based on the short story “Night Bus” by Samuel Hopkins Adams that also inspired the movie, It Happened One Night. A Good Reed Review is planning to review the show and enjoy the first gala opening of The Pear Theatre.

(Photos by A Good Reed Review, except where otherwise noted)