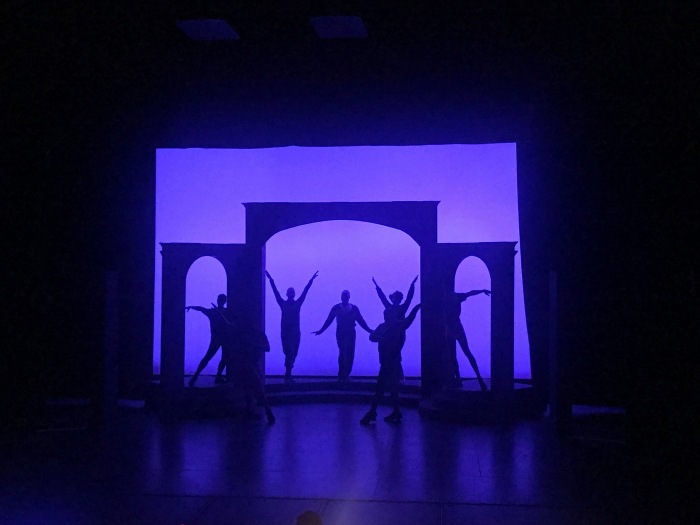 Sunnyvale Community Players finishes its 49th season with a groundbreaking Harvey Fierstein/Jerry Herman classic, La Cage aux Folles, which runs at the Sunnyvale Community Theatre Thursdays – Sundays, 21 April – 12 May. Fierstein and Herman didn’t originate the story – Jean Poiret did that in 1973 with the play that spawned multiple adaptations for the big screen and the stage. The first adaptation of the play was for the screen in the 1978 Franco-Italian comedy of the same name that received many accolades from critics worldwide. There were two sequels to the original film. The first was released in 1980, and the second followed in 1985. In 1996, the Mike Nichols/Elaine May American remake, titled The Birdcage and starring Robin Williams and Nathan Lane, made the rounds, and it continues to be a popular film today.

The Fierstein/Herman Broadway adaptation hit the stage in 1983 to a fairly warm reception. Over the years, several revivals have surfaced, and each garnered more award nominations than the original, all noted for their witty dialogue, accessible story, and typical Jerry Herman music that’s full of flash and zest to go with the lively choreography. SCP is presenting the 2010 version of the show.

The plot focuses on a gay couple whose son is getting married … to a woman. The story is at turns sweet, serious, and farcical as it takes audiences on a journey. The couple, Georges and Albin, have been together for ages, and together have raised their son, Jean-Michel. Though he wasn’t planed, Jean-Michel was born of a one-night-stand that Georges had long ago. Georges and Ablin have spent their careers in the entertainment industry – specifically drag entertainment. As entertainers, their lives aren’t much different than any other night club owner or performer, but the twist comes during the fateful “meet the parents” event. Their son’s fiancée’s father is an ultra-conservative politician. Somehow, even the farcical elements seem a little topical these days.

The cast is headed by Ray D’Ambrosio as Georges, and George Downes (otherwise known as WooWoo Monroe) as Albin. Their son, Jean-Michel is played by James Schott, and his fiancée Anne is played by Becca Euchler. The prospective in-laws are played by Chris Moylan and Rachel Michelberg in grand fashion. 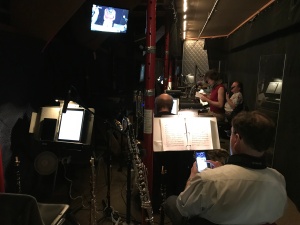 The tiny, but mighty pit includes:

Though it won’t be obvious from the house, the orchestra will be live and sequestered down in the covered pit. That removes any danger of a dancer falling in and damaging any of the instruments.

Tickets are available online through the Sunnyvale Community Players website or by phone at 408-733-6611. A Good Reed Review readers can get a $3/ticket discount by using the code “Zaza” when ordering. Again, the show runs Thursdays – Sundays, 21 April – 12 May 2018.

Performances will be at the Sunnyvale Community Theatre located at: 550 E. Remington Dr., Sunnyvale CA 94087.

The big messages here are that it is OK to be what you are, and love will triumph over just about any hurdle thrown in its path. The ending is satisfying, and audiences will leave the theatre with smiles on their faces and songs playing in their heads long after the curtain falls.

Please join Sunnyvale Community Players for this production. You will be glad you did. 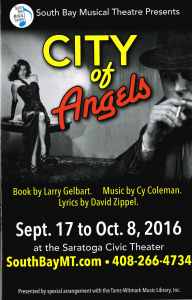 Who doesn’t love a tangled murder mystery? SBMT has one in City of Angels, complete with a full orchestra highlighting all the twists and turns in the story of a 1940s detective novel being transformed into a Golden Age Hollywood movie. This show (with book by Larry Gelbart, music by Cy Coleman, and lyrics by David Zippel) captures the film noir feel of the period, embellishes it with witty dialogue and a classy jazz score, and neatly packages it into an evening of exquisite theatre. END_OF_DOCUMENT_TOKEN_TO_BE_REPLACED 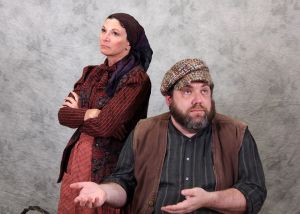 “A fiddler on the roof. Sounds crazy, no? But in our little village of Anatevka, you might say every one of us is a fiddler on the roof, trying to scratch out a pleasant, simple tune without breaking his neck…how do we keep our balance? That I can tell you in a word – tradition!”

West Valley Light Opera is proud to present its production of Fiddler on the Roof this November and December in Saratoga, CA. END_OF_DOCUMENT_TOKEN_TO_BE_REPLACED 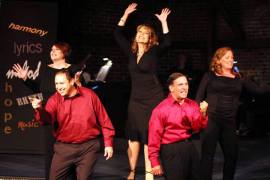 Tabard Theatre Company starts its 13th season with The World Goes ‘Round, a musical revue featuring the works of John Kander and Fred Ebb. The show was conceived by Scott Ellis, Susan Stroman, and David Thompson who weaved an interesting musical journey using the Kander and Ebb oeuvre from the worlds of stage, film, and television. The original production premiered Off-Broadway in 1991 and went on tour in 1992. In its current form, the show features works from New York, New York; 70, Girls, 70; The Happy Time; The Rink; The Act; Woman of the Year; Liza with a Z; Kiss of the Spider Woman; Funny Lady; Chicago; Cabaret; Zorba; Flora, The Red Menace; and two original songs written specifically for the revue. As director Diane Milo points out in her program note, the performers in this Tabard production have “all done the show before … and keep coming back for more.” END_OF_DOCUMENT_TOKEN_TO_BE_REPLACED