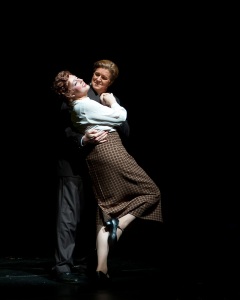 Enter the world of vaudeville, the original variety show, and for the performers a tough life traveling from city to city, trying to keep their acts fresh. A Broadway sensation loosely based on the memoirs of stripper Gypsy Rose Lee that debuted in 1959, “Gypsy” takes us into that world as we follow the mother of all stage mothers, Momma Rose, doing her level best to promote her daughters Baby June and Louise and take them to stardom while the age of vaudeville fades away.

With book by Arthur Laurents, music by Jule Styne, and lyrics by a very young Stephen Sondheim who had to be convinced by none other than Oscar Hammerstein to do a show “just writing lyrics,” “Gypsy” spans the early 1920s to the depression era early 1930s as vaudeville dies, burlesque surges forward, and lives are changed.

The story begins with an audition for Uncle Jocko’s Kiddie Show, and we are treated to various child acts, none of them very good, but we get a sense of Rose’s aggressive nature and of the “star” quality of Baby June, the younger of Rose’s daughters and the favored one to push to prominence. It’s a shame that while Rose has determination, she has no eye for the content needed to build a good act.

Shortly after a showdown with her father, Rose takes the girls to another audition in Dallas, where she meets Herbie, an unmarried, former agent who now sells candy to the vaudeville houses. Herbie takes a shine to Rose after she induces him to help them, and they change the act and arrive in Los Angeles for yet another audition, this time with the addition of newsboys. Louise is one of the “boys” in this rendition, and during the lengthy scene, the children transform into young adults, Baby June becoming Dainty June, still dressed in a childlike costume to preserve her youthful image.

More auditions and more changes to the act taking away the newsboys and adding farm boys along with the addition of a cow from Rose’s dreams (the cow becomes a running gag through much of the show). Rose pushes hard, and the girls have dreams of their own wishing that Momma would marry Herbie, and stop living vicariously through them. Eventually, June secretly marries Tulsa, one of the farm boys, and they take off to start their own act away from Momma Rose’s influence. Not to be deterred, Rose turns her focus to Louise, now determined to make her the star of the show.

More traveling and more transformations ensue. They eject the boys and add girls to the act, and Herbie finally gets them a paying gig at a burlesque house. Here they meet unique characters, are befriended by one of the strippers, and after they complete their stint, Louise is called upon to pinch hit for the headliner. A star is born as Louise becomes the famed Gypsy Rose Lee. There’s more to the story beyond this point, but that would be giving too much away.

Broadway by the Bay’s Amanda Folena has staged a worthy production with several stand-out principal players. Heather Orth is striking with fierce determination as Momma Rose. Vocally, she evokes the right emotion required by the part, such as delivering a driving “Some People” as she argues with her father, and a sweet “Small World” as she convinces Herbie (played by Walter M. Mayes) to help her and her daughters. Well matched physically as both are quite tall, there’s strong chemistry between Orth and Mayes, and they are enthralling together. Their characterizations are all the more impressive given each is cast against type.

June, played by Mary Kalita, and Louise, played by Samantha Bruce, are also well matched. Their “If Momma Was Married” is touching in the scene where they show sisterly solidarity, neither one happy with how hard Rose pushes them. Bruce’s transformation through the show from the lackluster, shy, older sister to star later in Act 2 is fascinating to watch. She works well with Mayes and Orth along the way, and their “Together Wherever We Go” early in Act 2 is fun and well executed.

Tulsa, played by Patrick Ball, has a boyish charm, and he comes into his own with his rendition of “All I Need Is the Girl” late in Act 1.

The “track” players, Adam Magill and Daniel Cunningham, each play various roles associated with theatre or lodging and adeptly change personas for each.

Mazeppa, Tessie Tura, and Electra, all denizens of burlesque played by Robyn Tribuzi, Karen DeHart, and Lisa Cross respectively, are very engaging and creatively costumed. DeHart in particular has a nice stage rapport with Bruce as they become friends.

While there aren’t a lot of special effects, the newsboy scene when the children transform into adults mid-routine is well done using strobe lighting and movement.

The sets are understated and sparse, such as using the backs of flats along the edges of the stage to give the audience a “backstage” flavor, or a couple of easily moved beds and small table for the hotel room. They give the impression of the location, but they also allow for very quick scene changes. This helps tremendously with keeping the show moving. While the cadence of the show overall is tight, there are a couple of exceptions. The latter part of the stripper routine late in Act 2 and the following confrontational scene drag a bit, although this is due more to the writing than the performances.

Musical director Rick Reynolds has put together a reasonably good orchestra although on opening night, there were a few problems. A vibrant score, brash and brassy in places, the trumpets missed during some key (and exposed) phrases; whereas, in other challenging sections, the brass players were brilliant. Hopefully this will smooth out as they settle into the run. The remainder of the orchestra is strong, Reynolds’ tempos are on point, and overall the cast-orchestra balance is quite good.

This is a solid production worth seeing as it continues through 9 October 2011 at the historic Fox Theatre located at: 2215 Broadway Street, Redwood City, CA. See http://broadwaybythebay.org or call (650)579-5565 for tickets or more information. There’s always a lot going on in the square near the Fox Theatre, so allow a bit of extra time to get there. There’s plenty of free parking within easy walking distance of the theatre.

One thought on “And So Goes Momma Rose”

Join 380 other subscribers
Follow A Good Reed Review on WordPress.com