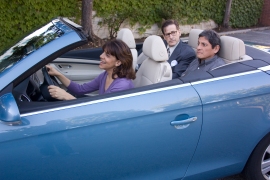 Life can be a very windy road, and in Dragon’s current production of Steven Dietz’s play, Becky’s New Car, we travel some of that road with our protagonist Becky Foster (Mary Lou Torre).  In her opening monologue Becky tells us that when a woman “says she wants a new car, she wants a new life,” and she takes some very interesting turns.

This Dietz play was commissioned in 2007 by Charlie Staadecker to present to his wife Benita for her 60th birthday, and quite a present it was.  The play is, on the surface, a comedy, and wild one at that.  Dig a little deeper, and as director James Nelson points out in his program notes, it’s a play about commitment and how that affects each of us and how each of the characters in the story are affected by their own commitments.  Dietz uses an interesting narrative style in his prose making liberal use of a fluidity of time and place, instantaneously switching locations at the whim of a character’s thoughts.

Becky is searching for something, buried in her daily life taking care of her house and her family, working at a car dealership, and generally in a rut.  Her husband Joe (Ben Ortega) is complacent with his life, content to go about his business.  Becky describes their son Chris (Sam Bertken) as a “26-year-old freeloader,” a psychology student still under their roof who she hopes will soon find his bliss and get on with his life.  Her colleague and friend Steve (Jim Johnson) is a tad frantic, still grieving over his wife’s fatal mountain hiking accident.  Walter Flood (Kevin Copps) is a billionaire widower and customer who is grieving over his lost wife.  He comes into the dealership and misunderstands Becky.  His immediate interest in her triggers the journey down a very twisted road.  Kenni (Roneet Aliza Rahamim) is Walter’s daughter, and Ginger (Helena G. Clarkson) is the Floods’ neighbor.  It doesn’t take long for misunderstandings and lies to multiply and complicate everyone’s lives.

Julia Sussner’s set is simple and very functional.  There are several areas on stage including a trellis upstage right indicating the Flood estate, a sofa center stage that serves a dual purpose as Becky’s living room and her car, and upstage left, a semblance of an office with a laptop atop the desk.  Will Poulin’s lighting design allows for quick changes snapping us from one location to another with the flip of a switch (and sometimes a request from Becky on stage).

Sound designer Lance Huntley finishes off setting the mood with some car-themed music during the pre-show and intermission breaks using songs like “Rollin’ in My Rolls”.  The required safety announcement is clever, keeping a car dealership’s feel and tone as it plays over the sound system after Becky’s first entrance.  A “wolf howl” ring tone on one of the character’s cell phones is also a nice touch.

The play breaks the fourth wall off and on throughout the performance, Torre, and to a lesser extent Ortega, addressing the audience directly, and very effectively.  Nelson’s cast embraces the story’s fluid nature, captivating the audience from the top of the show through the bittersweet ending.

After racing through vacuuming the living room, Torre’s opening monologue draws everyone in as she comfortably addresses the audience as a bunch of old friends.  She even makes them co-conspirators at times, so fair warning.  When you come to see this one, you may end up in the show, albeit briefly.  Torre also relates well to her fellow actors, although, as written, her character keeps just a bit of distance.  She’s always got a hint of narration in her interactions.  She emphasizes the humor in her situation, and she treats even the darker moments gently as she expertly drives the story forward.

Johnson has tremendous comedic flair.  In one scene later in Act 1, he relates a situation that Steve experienced recently that on the surface could be extremely dark, but his energy and his delivery make it one of the funniest scenes in the play.  Of course Torre’s expression throughout Steve’s tale adds to its impact.

Ortega plays Joe with an almost sinister calm.  At first, he seems a bit like an afterthought, but his presence increases in intensity as the story progresses.  He’s controlled, mild, but he eventually lets the audience know that he’s well aware of what’s happening around him.  Bertken captures Chris nicely as well.  Though he stumbles on a few of his lines, many of which are packed full of psychology jargon, he projects an innocence and confidence appropriate for the 26-year-old he portrays.

Copps plays a sympathetic Walter who is caring, slightly doddering, a bit naïve, and trapped by his grief.  Copps generates a spark when Walter thinks he’s found a renewed purpose, and he plays well off of both Torre and Ortega.

Rahamim and Clarkson both play minor, but pivotal characters in rounding out the cast.  Kenni and Ginger each have an important impact, primarily on Walter, and help drive the story home.

Becky’s New Car is a well-written, well-acted, fun-filled ride through the lives of these characters.  Hop in your car, whether new or old, and take the drive to see this one.  There’s plenty of free parking in the county garage down the street.

One thought on “Dragon finds the right car”