Yes, I know it’s not quite Thanksgiving yet, but December is fast approaching, and that means that if you are a saxophone player (no matter your level) it’s time to sign up to play in this year’s San Jose Saxophone Christmas. You’ve never heard of Saxophone Christmas? Well, for over two decades, a whole bunch of saxophonists get together on the third Saturday in December to join in the fun playing holiday music. 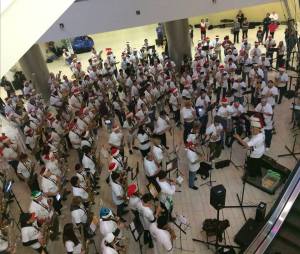 In recent years, there have been around 200 musicians playing everything from soprillo saxes (the smallest commercially made saxophone in existence) to tubax or contrabass saxophones (the biggest), and everything in between. Saxophone Christmas founder Ray Bernd takes a little time during each concert to talk about the different saxophones being played and invites each section to raise their horns as he calls them out. Watch out for the bari players, as they are really feisty.

For the players, it’s a full day of music starting with a rehearsal in the morning, followed by two one hour concerts in the afternoon, the first at Christmas in the Park in San Jose at 2PM, the second at Vallco in Cupertino at 5PM. The only requirement is that you’ve played saxophone for at least two years. Beyond that, there are musicians of every level having anywhere from two years to a lifetime of saxophone playing experience. Some of the musicians play a lot, others play once year for this annual event, and together, well, you have to hear it to believe it. A friend of mine from the San Francisco symphony used to say that for him, the holiday season started when he came to hear the “Saxophone Orchestra” in San Jose.

If you’re not a sax player, then just come enjoy the music. After all, without an audience, those concerts would just be more rehearsals.

Want to see some samples, take a look at these:

Hope to see you there!