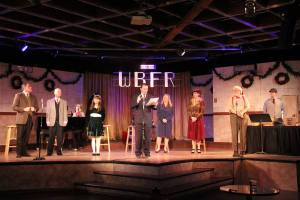 Thanksgiving is over, and it’s December. Many folks spend time with family and friends enjoying holiday entertainment and festivities during this part of the year. Before the television age, LUX Radio Theatre followed certain movie releases with live radio presentations of particularly compelling stories. Four years ago, in a tribute to that bygone era, Tabard Theatre Company brought us a stunning production of It’s a Wonderful Life: a Live Radio Play. This year, they’ve done it again as they return us to the WBFR radio studio to present another holiday classic – Miracle on 34th Street – a Live Radio Play, adapted by Hayley Lovgren from the 1948 LUX Radio Theatre script.

1948 wasn’t the first time LUX Radio Theatre broadcast its version of the play. It first aired in December 1947, several months after the successful movie release. It then aired again in December 1948, and finally one last time in 1954, each time featuring Maureen O’Hara, John Payne, and Edmund Gwenn reprising their movie roles in the audio format. Audio files of those broadcasts and the 1948 script archive transcription are available on the www.ttdyradio.com archive.

Miracle on 34th Street is a story of hope, as Kris Kringle is hired as the Macy’s Santa one holiday season. The kind, jolly old gentleman with white whiskers turns Macy’s on its head, and changes the way a few skeptics think about dreams and Christmas.

The set is simple, yet gives us the feel of an old-time radio studio decked out for the holidays. A Christmas tree is the centerpiece on the upstage center platform. The piano faces the audience, and it too has holiday flourishes. Seven tall stools are placed on stage, upstage of three standing mikes. A Foley table is upstage left, one of its most noticeable items is a partial doorframe sitting on the table. The house is part of the set in a sense, and as we are told in the curtain speech, we have a role to play – that of the live studio audience.

In the program, the actors are listed by their radio personality names, and only parenthetically as their characters in the audio dramatization, though a couple of them aren’t technically in the story. Snider is “type-cast” as the studio pianist. The show isn’t a musical, but in the style of old radio shows, she plays through much of the action providing background music that punctuates the story being told. DeRosa plays WBFR’s stage manager who gets drafted into providing sound effects when the sound engineer (played by Muntean) is pulled into service as Kris Kringle for the broadcast. DeRosa provides the sound effects “Foley Artist” style on stage. He also gives a preshow talk demonstrating several effects which lets the early arrivals in on some of the trade secrets.

Kirby, Melnick, Lentz, and Muntean play the principals in the story within the story, while Zigler, DeHart, and Visini are the “radio personalities”, each playing several different characters.

At the start, they prepare to begin the “LUX Radio Theatre” broadcast. Each cast member makes an entrance, they are introduced to the studio audience, and away we go. They start with a Lux soap commercial and associated jingle. Although most or all of the cast members are veteran musical theatre performers, the vocals in this show are few, and they are humorously cheesy and somewhat rough since radio personalities are not necessarily singers.

When they get into the story within the story, that’s when the real action begins. They take turns at the standing mikes and retreat to their stools during the down times. Since they are playing voice actors, there isn’t the distinct need for physical action, though there is some.

Zigler in particular, plays so many different characters, that it appears that some of his technique includes changing physical presentation in addition to his vocal characteristics to become each different persona. He’s brilliant in his portrayal of each separate character, giving them vary unique attributes. Zigler’s characters range from a small girl to several men of different positions and authority. He adopts different accents, mannerisms and a few props as he flips between characters, and even a few line stumbles opening weekend worked in context. Each of the cast members in the “radio play” portion holds a script, and Zigler’s appears to be color coded with highlighter.

In contrast, DeHart and Visini, who also each play several different characters, use less physicality. Visini’s vocal changes are a little more subtle than Zigler’s, but they are clear and convey different people convincingly. DeHart faces a slightly different challenge. A couple of her characters are men, and while she adopts a believable, and humorous, “male” timbre, there isn’t that much contrast between her adult male characters. Her “little boy”, and her female characters, on the other hand, are nicely separated and distinct.

The “principals” in the inner story don’t have the need to flip voicing, so Kirby, Lentz, Melnick, and Muntean are more focused on their “single” character portrayals. They are each convincing, and they work quite well together. Kirby and Melnick play the romantic leads within the inner story. Even though done as voice actors, they develop a nice chemistry that evolves through the course of the play with Lentz providing an enthusiastic, youthful catalyst to push them together.

Likewise, Muntean becomes Macy’s Santa who thinks he’s the real thing in the inner story. Is he real, or is he just a really good store Santa pulling everyone into his whimsical world? It helps that Muntean (and by proxy his Buddy Schlubman/Kris Kringle) have the Santa look down, even though the “radio” audience listening to the show on air, clearly wouldn’t have that visual.

This is a heart-warming production that is great entertainment for the entire family. If you are looking for a sweet holiday show this season, get down to Tabard at Theatre on San Pedro Square before 18 December 2015. It’s worth the trip, and it just might make you believe in Santa again.

What: Miracle on 34th Street, adapted by Hayley Lovgren

When: Continues through 18 December 2015