Skip to content
HomeBook Review: ‘Harry Potter and the Cursed Child’ adds a thrilling eighth chapter to the series 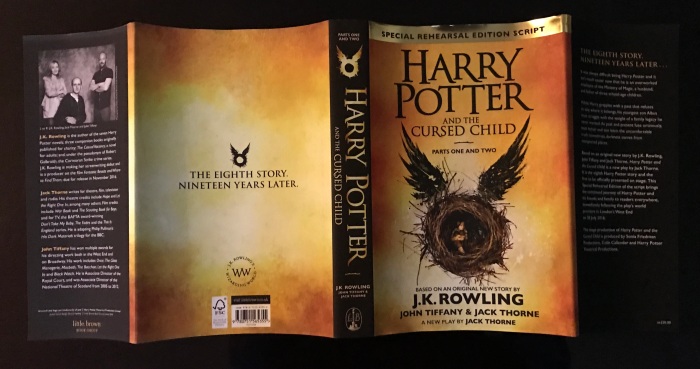 J.K. Rowling discovered gold when her first Harry Potter book, Harry Potter and the Philosopher’s Stone (renamed to Harry Potter and the Sorcerer’s Stone outside of the U.K.), hit the presses in 1997. Intended as the first installment of a seven-part children’s book series, it fortuitously (though unexpectedly) appealed to readers of all ages. Rowling released the subsequent books over the next decade with the final installment reaching the shelves in July 2007 with Harry Potter and the Deathly Hallows. The reception was phenomenal. Not only did readers clamber for each new book, the movie industry embraced the stories and released blockbuster adaptations of each one, the last taking two films to fully explore.

In 2015, a new story synopsis in the Harry Potter oeuvre surfaced. The story was written by J.K. Rowling, John Tiffany, and Jack Thorne, and Thorne went on to put this story into the form of a play. The full rehearsal script of Harry Potter and the Cursed Child was released on 31 July 2016, one day after the maiden voyage of the play opened in London. This review discusses only the script as a book, not as commentary on any performance of the material.

Reception by Harry Potter fans worldwide has been overwhelmingly positive. Most fans are relieved that the story is now continuing, picking up nineteen years hence in this new version, but some have been slightly less enthusiastic. There is a difference between a novel and a script.

When reading a novel, the reader is often treated to lavish narratives setting the scenes in great detail, sometimes aided by drawings to spark the imagination. In addition, the reader is also often lead through the characters’ inner thoughts and motivations, at least as applicable to the author’s chosen point of view. When reading a script, the reader generally must take a much more active role to engage in the story.

While written stage directions supply some of the environmental description, some must also be imagined, and character motivations are not explicitly stated, but are instead interpreted from the dialogue. For a reader familiar with reading scripts, this becomes second nature, and for those well-versed in the theatre, a reader’s imagination can run a bit wild thinking about how a given creative team might implement theatre magic to make the story come alive on stage. Fortunately, Harry Potter and the Cursed Child has copious amounts of stage directions and even snippets of inner thoughts, so even readers with no previous Harry Potter exposure will have plenty of clues. Of course, Harry Potter fans of all ages have a deep understanding of the wizarding world in which Rowling’s characters live.

This current installment picks up at King’s Cross. Harry and Ginny Potter are preparing their children to run through the barrier to platform nine and three-quarters for two of them to board the Hogwarts Express at the beginning of the school year. Hogwarts is the school that all wizards and witches attend from ages 11-18 to hone their wizarding skills.

Harry’s younger son Albus Severus (named after two former Hogwarts Headmasters who had a significant influence on Harry while he was growing up) is slightly more prepared than his father was all those years ago, but he is still proceeding with caution with his older brother, James, taunting him about what lies ahead. Albus fears the infamous Sorting Hat and where it might put him.

The four houses at the school are Griffindor, Hufflepuff, Ravenclaw, and Slytherin. These houses are a combination of their living quarters and much more, not unlike the Greek system at many of today’s universities. As such, each house has a bit of infamy attached to it, particularly Slytherin which was the house of the chief villain in the wizarding world.

The Sorting Hat is the age old method by which new Hogwarts students are assigned, or sorted, to a house. Being a magical entity, a student’s personal potential, attitude, history, and even their preferences are considered by the hat at the time they are sorted.

Several well-known characters from the previous stories are either met or mentioned before the train even leaves the station. Harry and Ginny Potter have three children, James, Albus Severus, and Lily. Ron Weasley and Hermione Granger have a daughter, Rose Granger-Weasley. Neville Longbottom is a Hogwarts Professor. Fred and George Weasley are mentioned in passing.

We later also hear about Draco and Astoria Malfoy, and in the next generation, their son Scorpius and Albus become misfit friends, much to Rose’s chagrin. Hogwarts starts out a bit rough for the boys. Each carries a difficult burden, with Albus being the son of Harry Potter, and Scorpius having a former Death Eater (follower of the Dark Lord) for a father. For poor Scorpius, an even a worse rumor hounds him somewhat mercilessly.

The story moves quickly through the first two years at Hogwarts for the boys, with Lily joining them in their third year, so the next generation includes three Potters, one Granger-Weasley, and a Malfoy, among others. As time passes, Albus and Scorpius find themselves navigating rising troubled waters both at home and at school.

Back home, Harry and Hermione end up with their own mystery to solve, and of course, in time, the mysteries of the parents eventually intersect with the mysteries of the children in typical wizard world fashion. The timeline is once again put at risk by a version of the infamous Time Turner that’s far more dangerous than the one Hermione had used as a student at Hogwarts. Crises erupt, born of a combination of the impetuousness of youth and a search for belonging. Along the way, Voldemort’s influence is felt, and the bounds of good and evil are bent, but not broken.

The character development in the script is quite touching in places, with shifting family dynamics, strong friendships, and ongoing loyalty built upon the history from the novel series. While each of the books in the series can stand alone as a rollicking adventure story, it helps to have read them in order to catch the nuances. This holds true for the current installment as well. The story can stand on its own quite nicely but having the background from the previous books gives the reader a better foundation upon which to build.

Harry and Hermione pick up where the series left off, each of them very recognizable as the adults readers have expected them to become. Ginny is drawn less robustly, but she provides a bit of balance to Harry’s aloofness. Ron Weasley, Ginny’s brother, is drawn with the least depth. In this story, he reads a bit more like an extension of his brothers Fred and George whose lives revolved around their jokes and tricks, though Ron doesn’t seem quite as bright.

The bigger character shift is with the Malfoys. Draco is drawn with more depth and compassion in this installment. He’s genuinely concerned about his son. Harry too cares about his children, but he struggles as he tries to reach his troubled middle child.

The story evolves quickly, and the book is difficult to put down. As a script, it’s written in two parts, and together clocks in at 320 pages. While the play’s prose isn’t specifically Rowling’s writing, the story certainly is. Thorne captures her style beautifully, and this book is a welcome addition to the Harry Potter series.