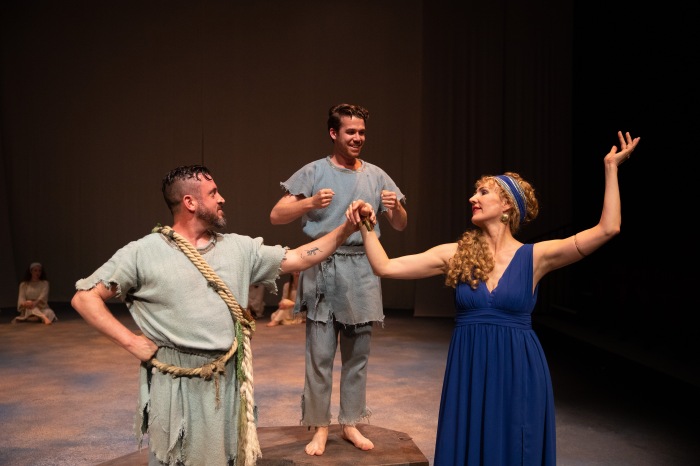 This summer, Stanford Repertory Theater’s festival is aptly entitled Nevertheless They Persisted in tribute to the strength and perseverance of women throughout history striving to overcome oppression. Rush Rehm again helms the live theatrical portion of the festival, directing a work that he and Courtney Walsh (the star of the production) adapted and combined from two of Euripides’ plays, Hecuba and Helen. This new adaptation, Hecuba/Helen, is presented in two acts running approximately two hours including a short intermission. Rehm, a professor of Theater and Classics, has long noted the relevance and value of Greek tragedies, and through a stroke of inspiration pursued combining these two stories of strong women from a time and patriarchal culture when women had no official power. He sees many lessons for today’s societal turmoil in these ancient writings and is excited to bring this adaptation to Stanford Rep audiences. In his program note, Rehm reveals the relevance of Euripides’ writings from a societal perspective:

“Disturbing and terrible, recognizable and even funny, Euripides’ plays have much to offer us – a society that aggressively denies its own obvious limitations and has so little interest in the lessons of the past.”

This adaptation is clever, and the plays fit together surprisingly well, seamlessly transmuting from one into the other. As executive producer Lizzy Ten-Hove states in her program note:

“Hecuba vividly shows the consequences of military defeat for the conquered. … Helen … presents a different side of the Trojan War.” 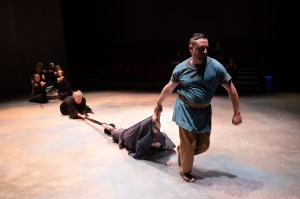 The story initially centers on Hecuba as the central character, the former queen of Troy now held captive along with the rest of the women. Defeated, they are the only ones left from the previously great city. All have suffered loss of family members, but for Hecuba, her loss is the worst that a mother can endure, the loss of not one, but two of her children. She is surprisingly resolute, and with the help of a sympathetic ally, and a horde of women who have also suffered significant loss and persecution, she takes surprising and satisfying action.

Ten-Hove goes on to describe how Helen stems from a different perspective – that of the winning side, sort of. Helen was separated from the action and stranded in Egypt for many years. She is aware that her husband’s army thought they were fighting and honoring her, when in reality, the one they thought was her was a phantom constructed by the gods as part of a cruel joke. Ten-Hove notes that there is more humor amidst the tragedy in this story. She also shares a serious insight once Helen eventually reunites with her husband, Menelaus:

“…the two are forced to confront the reality that ten years of war and death – like the long Peloponnesian War – was for little or nothing.”

In spite of this heavy revelation, Helen’s cleverness comes to light early in her part of the story, and she has a flair for humor despite the tragedy of the situation.

Connie Strayer’s set design is effective and polished with floor to ceiling fabric upstage forming screens that are primarily used for projections and also serve as a barrier to the backstage area. One of the screens doubles as an unexpected prop during a critical Act 1 scene. A small, movable wedge serves a multitude of functions as a platform, a gathering place, and various obstacles. Seating is on three sides of the stage area, the Roble Studio Theater being a spacious, converted gymnasium outfitted with air conditioning, full theater lighting, and reconfigurable seating. As a side note, the complex still appears as Roble Gym on Stanford campus maps due to a grant requirement when the building was initially constructed.

Composer and sound designer Michael Keck created a masterful backdrop of sea sounds and original ancient-sounding music to enhance the action. The sound plot is ever-present and accentuated by projections depicting natural phenomena and locations expanding the story. The projections include gorgeous Nile river shots, exquisite sand formations, pyramids, and stellar phenomena, all of which were researched, curated, and presented by the video/projection team of Katerina Zacharia (image researcher), Nima Deghani (projection designer), and Stephen Hitchcock (projection consultant). Lighting designs by Michael Ramsaur and Catherine Teitz focus audience attention and add to the dramatic sweeps.

Walsh eloquently plays the title roles of Hecuba and Helen in each piece of the story. Her characters’ cunning and refusal to surrender to authority despite horrific odds are admirable and gripping to watch. While both roles are strong women, Walsh makes each unique, displaying their disparate strengths. Her transformation from Hecuba to Helen is exciting, dropping her vengeful, Hecuba-persona and morphing into Helen who later explains:

At the press opening, Rehm described the Greek Chorus as being very useful in telling a story. In his view, it has far more flexibility than any specific character. He relates it to the greater community that can at times be omniscient and at others can be oblivious to potential outcomes. It can bring emotion to bear in ways that an individual cannot. In Hecuba/Helen, the Chorus consists of seven women (two of the members of the Chorus take on additional roles at different points in the story) including Jennie Beck, Gianna Clark, Regan Lavin, Amber Dale Levine, Brenna McCulloch, Emma Rothenberg, and Lea Claire Zawada. The Chorus uses voice and movement to tell its portion of the story. At times, it gracefully takes the entire stage executing flowing dances to emphasize the story the being told. At other times, it is situated on the sidelines, ever watching, providing captivating commentary in song and verse. For much of Aleta Hayes’ choreography, tight synchronization is required, and although there is occasionally very slight phasing of a unison motion, stomp, or clap, the overall effect is impressive.

Joe Estlack takes on three significant male lead roles including Odysseus and Polymnestor in the Hecuba portion of the story, and in Helen, her husband Menelaus. Estlack’s performance is intense and even acrobatic at times employing some impressive tumbling moves.

Doug Nolan is Agamemnon and Theoclymenus, both sympathetic, if dupable characters, important to Hecuba’s and Helen’s plans respectively. Along the way, Nolan employs some of his specialty skills with some snazzy sleight-of-hand woven into the story.

Stanford Rep is known for their unique takes on challenging works, and this year’s production continues that tradition. The classics have survived through the years because of their relevance across the ages, and Rehm is a master at teasing out the lessons while providing engrossing entertainment. Don’t miss this production.

What:  Hecuba/Helen, translated and adapted from Euripides’ texts by Rush Rehm and Courtney Walsh