Gilbert and Sullivan’s The Pirates of Penzance has long been an audience favorite ever since it debuted in New York City in 1879 (just barely). Billed as a comic opera, it’s a little closer in style to our modern Broadway musical format than some of the other works in the Gilbert and Sullivan (G&S) oeuvre. Like much of their work, it pokes fun at 19th Century life, exaggerating stereotypical societal roles and attitudes for the sake of humor. The storyline is typical G&S fare. A young man is accidentally indentured as an apprentice (and accompanied by his nurse) to a pirate instead of a pilot until he reaches his 21st birthday (not to be confused with his 21st year of life). Shortly before his release, he falls instantly in love with the daughter of a Major-General, and the two seem fated to spend the rest of their lives together, that is until a rather unique paradox complicates their lives. Now for the Bay Area Opera Collaborative (BayOp) production, strike that, reverse it (with respect to gender anyway), and you’ll find that all of the humor remains and even grows beyond expectation.

In a typical production of the show, the pirates, police, and military are all men, either preying upon or protecting the fair maidens in their midst. The pirates are rogues with a soft spot for orphans which gives most of their intended targets an out (sometimes unscrupulously). In this BayOp production, the tables are turned, the societal roles are reversed, and the pirates are all women. The police and military are all women. And the highest level in the kingdom, i.e., the king, is a woman. The masters of the manors (and the people) are all women. And what of the men? Why they are the delicate flowers who must primp and preen and be protected.

Finkelstein has given this gender-swapped vision a great deal of consideration. In the universe that she creates, the gender swaps work well and are rather seamless. At first, the idea of the swap might make one think that instead of a king, a queen should be the highest office in the land, but in keeping with tradition (and avoiding some unintended complications of modern syntax), the office doesn’t change, only the idea of who is worthy to hold it does. And besides, switching pronouns is fine, but in the libretto, the rhyme scheme hinges greatly on the words “king” and “master” in so many places, that changing them would have run the risk of breaking the flow of the language.

Musically, the swaps also work well, though they bring different emphasis to many of the numbers. In all of the nominal, full-chorus SATB vocals, the singers stay on the parts of the original. In the solos or character dependent vocals though, only the octaves are changed, save for a few small idiosyncrasies. The song “When Flora was a little lass” (originally “When Frederic was a little lad”) sung by the nurse who doomed Flora into association with pirates, is raised a minor third to better fit the singer’s range. In a few isolated spots of other numbers, a single voice might be brought up the octave instead of down on a given chord as necessary. 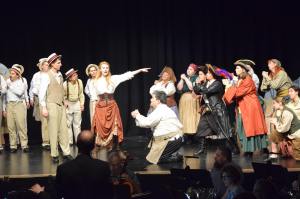 Chin and Krawec have a nice dynamic of the caretaker with his charge coming of age. Chin is an extremely sympathetic nurse, waiting in the background hoping not to lose Flora who he loves with all his heart. His solos are thoughtful and plaintive. When their confrontation comes, both Krawec and Chin are sympathetic, and play it very realistically despite the obvious humor underscoring the interaction.

When Ressler and the rest of the wards come on the scene, he draws special notice as the most delicate, dainty (despite his height), and is coyly smitten with Flora only hoping that she’ll notice him. And she does. The chemistry between Krawec and Ressler works extremely well. Their first meeting is tender, each singing sweetly to the other as the rest of the boys shyly gaze on. Ressler handles the cadenza trills nicely in his songs, and in his range, they are definitely more humorous than they would be in a traditional production.

Hayati is a powerful Pirate King. She has a forceful stage presence and the vocal chops to be heard over the chorus and orchestra on her solos, although some of her songs in the upper register are a little more jarring than they would be if sung in the original bass-baritone range. She has the swagger down and the visible frustration when thwarted by those claiming to be orphans to escape her pirate band’s attack. 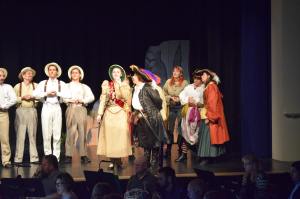 Brennah Kemmerly (Major-General Stanley) has the confused motherly figure down, especially late in Act II when things are happening right under her nose but comically escape her notice. Her diction in “I am the very model of a modern Major-General,” one of the most challenging songs in the show, isn’t crystal clear. Part of that may be due to the range in which she is singing obscuring some of the clarity, and part may be that it’s just hard to get all the words out. She is a little behind the orchestra on this one, and some of the words are lost. Her interactions with her sons is touching though, and she is a convincing matriarch in her domain. Jennifer Basarab-Tung (Sergeant of Police) acts her role confidently, but she is slightly overshadowed by the police chorus. Although none of the cast or orchestra members are amplified, Basarab-Tung would benefit from a little boost.

The chorus is strong for this production. The company-wide numbers are when the gender-swaps are perhaps the most amusing, particularly when the wards and the pirates dance, with the pirates twirling the wards in Willis’ well-executed choreography. The songs are clear and clean as they are heard throughout the house (except possibly in the first few rows until the seating is above orchestra level).

The orchestra is solid musically and is very well balanced. With the exception of just a few momentary intonation issues in the upper strings, the execution is impressive. The winds, brass, and percussion never overpower the strings, but they provide the appropriate emphasis during the more heavily orchestrated segments. The orchestra as a whole never overpowers the chorus or the stronger soloists. A few of the weaker solos are sometimes momentarily lost.

Kathleen O’Brien’s costume design is dazzling. She captures the feel of the Victorian era beautifully, with color and style, still keeping the attire appropriate for the jobs the people must do. The pirates, while a few have pirate hats, all have the required belts and sashes that mark them as pirates. They are garbed in a spectacular array of colors, some in trousers, and others in skirts that allow for the vigorous movements pirates must make as swashbucklers. The Pirate King wears an ornate and traditional pirate costume with lots of black, white shirt, and a splash of color for her sash. The military and police costumes also are period appropriate stylistically, have nice detailing, and are convincingly gender-swapped. The boys’ costumes are bland, in muted whites and tans, appropriate for their chaste state.

This is a solid production that maintains the story nicely in its matriarchal, alternate universe. As of this writing, there are only two performances remaining, but if possible, this entertaining and unique production is worth the trip.

Enjoy a little more background on the show from Peninsula Backstage:

What:  The Pirates of Penzance