Skip to content
HomeUrinetown, is it satire or a look ahead? 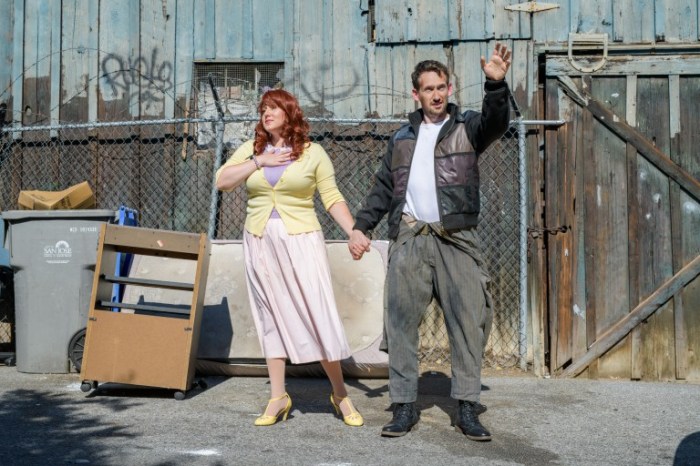 Sunnyvale Community Players (SCP) continues its season of unconventional heroes 26 October – 10 November 2019 with Urinetown: The Musical. This one is a satirical comedy that first hit the stage in 2001. The show has book by Greg Kotis, music by Mark Hollmann, and lyrics by Hollmann and Kotis. The music and lyrics hearken back to Kurt Weill and Bertolt Brecht both in musical style and in its lampooning of humanity’s darker propensities. It takes on the legal system, capitalism, and most grievously – corporate greed, while also focusing on social responsibility and revolution highlighting an unlikely hero. Along the way, it not only brings Weill and Brecht to mind, it also has callouts to several other musicals and parodies the Broadway musical art form itself.

What is Urinetown you might ask? SCP pulled together a little commercial with the hero of the story, Bobby Strong (Steve Roma), and an inquisitive Little Sally (Becca Euchler) to answer that question:

The story deals with a dusty town suffering from a 20-year drought. Severe measures have been put in place such that private bathrooms have been eliminated, and people are forced to pay for the privilege to take care of their most personal daily needs. Needless to say, this causes unrest and discontent in this dystopian environment, and a hero emerges to try to rectify things for the people.

Director Thomas Times, adds another layer to the concept by setting the story in the not-too-distant future (19 years hence) in East Palo Alto, an area that knows something about droughts and social separation. Times talks about his vision for the show in this Peninsula Backstage installment:

While this sounds like a very dark story, there’s plenty of humor and breaking of the fourth wall. 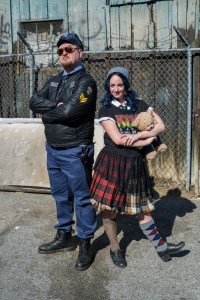 The Urinetown cast is ready for an audience and is guaranteed to make folks laugh, cry, and sit on the edge of their seats as they watch the story unfold. While the plot is driven by the principals (who are all standout performers in this one), the ensemble is very important. Many in the cast have studied this show extensively, and they surprised vocal director Juanita Harris with how quickly they learned the complex music in rehearsal, doing so much more quickly than is often seen at the community theater level. They also have been dazzling Derrick Contreras with their execution of his athletic choreography on the road to opening.

Ande Jacobson’s orchestra for Urinetown is small, only five players. 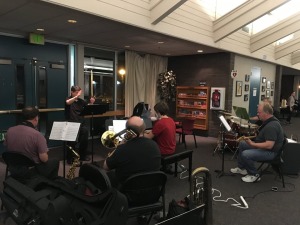 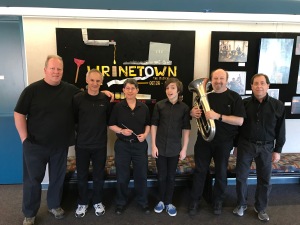 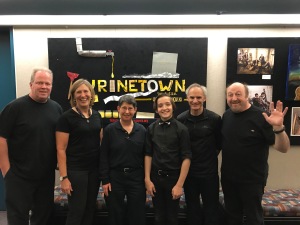 While most of the players are adults and are very experienced in the orchestra pits around the Bay Area, one player is enjoying his first pit experience with this show. Keyboard player Val Zvinyatskovsky is only 13 years old. While he’s an experienced and gifted actor having performed in over 20 musical theater productions with a number of the local youth theater groups in the area, his instrumental pursuits have been of a more personal nature to date. He is an accomplished pianist having begun his piano studies at the tender age of four. He has also done a bit of composition along the way. He hopes to eventually pursue a career in the arts, and he is up to the challenge of playing keyboard in the Urinetown pit in the first of many theater orchestras going forward. His big dilemma will be whether to be on stage, or under it for each of his future productions.

Tickets are available online through the Sunnyvale Community Players website or by phone at 408-733-6611. The show runs Thursdays – Sundays, 26 October through 10 November 2019. Use the code “Plunger” for a nice discount on your tickets through the end of the run. If you want an even larger discount, use discount code “TLKBCK” for the Sunday, 27 October performance only, and stay for the bonus talkback after the show.

Please join Sunnyvale Community Players for this production. You will be glad you did. Due to some intense satirical content, this show is not suitable for very young children.