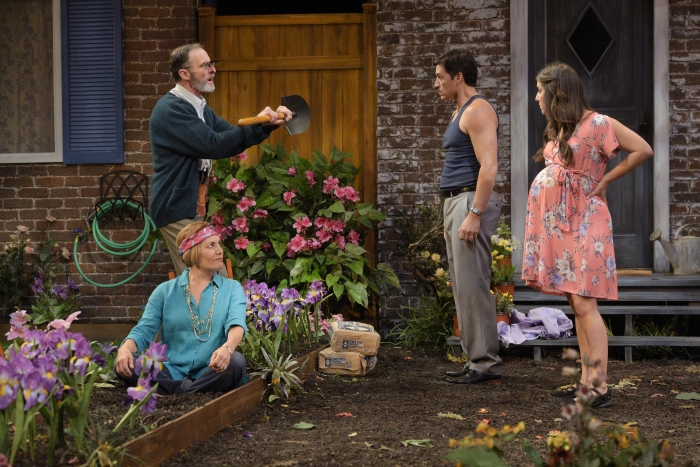 The regional premiere of a crisp, new Karen Zacarías play is the latest TheatreWorks production. Native Gardens is a very topical take on just what it means to be a good neighbor when a young couple moves into an old, established Washington, DC neighborhood. This tight, 90 minute production, presented without intermission, covers many of the issues facing the U.S. today through an extended interaction between neighbors starting with the best of intentions. Initially welcoming and friendly, the old neighbors meet the new neighbors. Over the course of the play, an intense backyard drama ensues over the position of the fence dividing the two properties. The dispute takes on monumental proportions and serves as a microcosm of the country, and perhaps even the world at large as the Butleys fight for the status quo on their side of the fence, while the Del Valles challenge their long-held views of their neighborhood, their culture, and their property’s borders. The story is at turns gentle, humorous, contentious, and thought-provoking, challenging audiences to perhaps consider a neighborly border dispute in a new light. Zacarías penned the story in 2015, and it has increased in its societal relevance ever since. END_OF_DOCUMENT_TOKEN_TO_BE_REPLACED