Pear Avenue Theatre’s May production is a fun one. Birds of a Feather, written by local playwright Paul Braverman, is the third and final chapter in the Frankie Payne trilogy. We follow Payne’s unpredictable path through Boston’s criminal underworld. She strikes sometimes uneasy (and often humorous) alliances with the shady characters there to right the wrongs that the police can’t always correct. This episode takes place in Boston from 31 October – 3 November 1965 and has a few surprises in store for audiences. END_OF_DOCUMENT_TOKEN_TO_BE_REPLACED 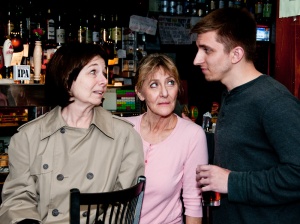 The Pear welcomes the world premiere of Paul Braverman’s latest work, The Apple Never Falls, as their current offering. Take a trip into 1964 Boston at the height of the Boston Strangler’s reign of terror in this film noir style story following Frankie Payne, a hard-boiled detective turned private eye. Per her client’s wishes, she investigates the murders attributed to the Strangler, searching for clues, and in the process, evaluating relationships, heredity, and furthering the age-old nature/nurture debate. This is a sequel of sorts to Braverman’s first Frankie Payne adventure, No Good Deed, which debuted at The Pear in early 2011. Braverman’s writing is fun, and being firmly planted in the noir genre, he smacks you with some twists that you don’t see coming, although the clues are there if you know where to look. END_OF_DOCUMENT_TOKEN_TO_BE_REPLACED