Singin’ in the Rain started life as an MGM film in 1952 showcasing the talents of Gene Kelly, Donald O’Connor, and Debbie Reynolds. It later became a classic film legend, even though it originally only enjoyed modest success. It tells the memorable story from the 1920s about the transition of the film industry from silent films to talkies, and humorously details the challenges felt by those unfortunate silent film stars whose voices were better left unheard. In the mid-1980s, the film was faithfully adapted for the stage keeping the story and all of the songs and memorable dances intact. It’s actually a little surprising that it took until the mid-80s to reach the stage given that its story fits the traditional musical mold so well. It’s an uplifting tale of boy meets girl, boy loses girl, and boy gets girl back in the end after a few interesting twists and complications. Then again, this show requires three true triple threats along with a well-synchronized dance ensemble, masters of tap one and all. And it requires on-stage rain, so it’s not a trivial matter to mount a successful production. END_OF_DOCUMENT_TOKEN_TO_BE_REPLACED

The Pear never backs away from edgy theatre, a tradition that’s alive and well in their current production – An Enemy of the People. Rebecca Lenkiewicz’s adaptation of Henrik Ibsen’s 1882 political masterpiece premiered in London in 2008 and made its Broadway debut in 2012. Though this version of Ibsen’s story is 90 minutes shorter than the original (the Pear’s production runs approximately 120 minutes including the intermission) and includes updated (and translated) language, the integrity of Ibsen’s material remains intact. The surprising aspect of this work is that although it depicts a situation in 1880s Norway, its themes and issues are just as pertinent to U.S. society today and include altruism and whistleblowing vs. profit and venal self-interest; media manipulation vs. the truth; free speech; and the educated elite vs. the working class. END_OF_DOCUMENT_TOKEN_TO_BE_REPLACED

West Side Story first hit the Broadway stage in 1957, and this famous musical, with book by Arthur Larents and music by Leonard Bernstein, gave the youthful lyricist, Stephen Sondheim, his Broadway debut. The show was groundbreaking, particularly for its explosive action, and it was nominated for six Tony Awards. While the show won for Best Choreography and Best Scenic Design, alas, it lost the Best Musical Award to Meredith Willson’s The Music Man. Most theatre or movie aficionados are familiar with the show, its plot bringing the classic story of Romeo and Juliet to the current era when it debuted. Today, its tale of the star-crossed lovers from opposite gangs forms a period piece, keeping the tension and angst of the time alive, and Broadway By The Bay’s production is one to be treasured. END_OF_DOCUMENT_TOKEN_TO_BE_REPLACED

Arcadia, by Tom Stoppard, is Pear Avenue Theatre’s final production in its Pear Avenue performance space, and this is one not to be missed. The play is claimed by many in the critical community to be Stoppard’s finest, with timeless themes and witty dialog that will keep audiences enthralled from start to finish. END_OF_DOCUMENT_TOKEN_TO_BE_REPLACED 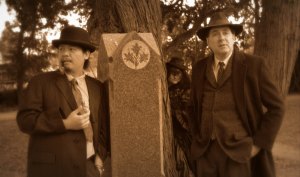 The Woman in Black, adapted by Stephen Mallatratt, is an impressive ghost story set in a small Victorian theatre and currently haunts the Dragon stage. Susan Hill’s 1983 horror novella of the same name was the source for this stage version, a play that has been running in London’s West End since 1989. It’s tough to tell an effective ghost story on stage, but this one is riveting. The plot follows Arthur Kipps, a man haunted by a terrible secret from early in his career as a London solicitor. He hires an actor to help him reenact the events that have haunted him so his family and friends will finally understand the horror that he’s been living with. Then he hopes he can bury the past and move on with his life. Sounds simple, right? END_OF_DOCUMENT_TOKEN_TO_BE_REPLACED

Could the earth be overtaken by invaders from Mars? On October 30, 1938 a lot of people thought so when the Mercury Theatre on the Air presented a radio adaptation of H.G. Wells’ novel The War of the Worlds. The broadcast took the form of a series of radio news reports, many on location as the invasion was supposedly taking place. Even with the disclaimer at the beginning of the broadcast that what followed was a fictional story, widespread panic ensued, in part because many listeners didn’t tune in at the top of the hour and missed the announcement. They were late because they had been listening to the Charlie McCarthy Show on a rival network, but that was in 1938. In the summer of 2014, Stanford Repertory Theater continues its Orson Welles festival with a must-see, fully staged version of this famous radio play. END_OF_DOCUMENT_TOKEN_TO_BE_REPLACED

Big Pharma has what many would say is a well-deserved reputation as being an industry solely focused on its profit margin. This theme is explored as Dragon Theatre Company opens its 2014, nine show season with Rx by Kate Fodor. Fodor’s script is a quirky satirical romance that also indicts Big Pharma. The plot follows one company’s pursuit of chemical solutions to non-problems as it convinces patients they are sick and that a pill can solve everything. Along the way, an unassuming researcher gets a bit too close to his study subject, and the resulting romance threatens both of their livelihoods. END_OF_DOCUMENT_TOKEN_TO_BE_REPLACED 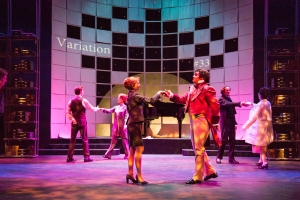 Beethoven’s 33 Variations on a Waltz by Anton Diabelli, Op. 120 is thought by some scholars to be one of the composer’s crowning achievements.  It’s a work that takes a mediocre 32-bar waltz written by Anton Diabelli and expands it into a 55 minute work of 33 variations exploring every nuance of the theme, or at least as many as came to Beethoven’s mind.  There are several conflicting theories as to the genesis of Beethoven’s opus, and playwright Moisés Kaufman has drawn from many of them to weave an intricate and captivating tale in his play, 33 Variations, now enjoying its regional premiere at TheatreWorks. END_OF_DOCUMENT_TOKEN_TO_BE_REPLACED

Arthur Miller’s iconic play, Death of a Salesman, is a slice of Americana, in some ways ageless, in some ways married to the time in which it was written. A tragedy packed with emotion that should take the audience through Willy Loman’s hopes and dreams for himself and his family, and ultimately, his deterioration and final demise. The story mixes “present day”, which is the post World War II era, with memories and imagination, nay, hallucinations of the past creeping into the present as Willy’s life spirals out of control. END_OF_DOCUMENT_TOKEN_TO_BE_REPLACED